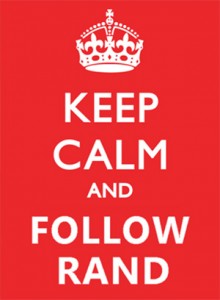 In our series review of Moz we are calling “Keep Calm and #followrand” today we are going to look at Whiteboard Friday.

In itself Whiteboard Friday is a genius of an idea in terms of marketing but profoundly simple, some guy (usually Rand but not always) stands in front of a whiteboard, on the whiteboard there is the topic of conversation for the week and the guy (or girl) will talk through the content on the Whiteboard for usally around 10 mins and it’s published every Friday, hence Whiteboard Friday. In terms of topic Moz will take an online marketing subject, any subject be it SEO, Social, Analytics or Sales Funnels.

What I’m most grateful for from Whiteboard Friday is I seldom have time to just stop and actually start a journey that ends up with learning something and think strategically about what I am doing. Unfortunately in an SEO environment the overwhelming majority of your time is spend doing SEO which leaves little time for keeping up to date which is critical in such a fast paced industry which most of you will understand.  That all makes time itself a precious resource. Unless Google have just done a mammoth algorithm update, which is actually a great name for an Algorithm Update (hint, hint!) some weeks there isn’t enough think time in the week to begin to look at ‘what’s happened on planet SEO in the last 7 days?’ END_OF_DOCUMENT_TOKEN_TO_BE_REPLACED

Introducing our “Keep Calm and #followrand” graphic. Each of the four images +1 can be uniquely downloaded (see the links at the end). Inspired by Rand Fishkin’s very English looking twirly moustache. Partly a touch of very English humour but also more seriously both by the prominence of Rand and Moz within the SEO community, so we thought we’d run a series of posts to review the top 5 features of Moz with the graphic to promote the series.

For those of who who don’t know, other than stating where have you been? Mr Rand Fishkin himself has been a vital personality in the SEO sphere for many years, indeed I remember hearing Rand speak at a SMX conference years back while I was just a wee bright eyed and bushy tailed SEO freelancer. Rand started Moz, or what was called SEOMoz back then and now is no doubt the premier suite of SEO tools available to SEO’s and non-SEO’s alike. We also quite liked the notion of promoting Rand’s Britishness, although of course (and sadly) he’s not British!

We’ll be publishing a series of reviews with what we think are the best 5 features of Moz and we’ll also be writing some follow up pieces. The SEO sphere has been shaken in the last couple of years, particularly though not exclusively by the Penguin updates. For me personally Moz has always been a place of stability in all of the chaos that working in SEO involves. END_OF_DOCUMENT_TOKEN_TO_BE_REPLACED