Recently it seems that all the talk on the web from Manchester SEO forums, blogs and other news stories has been about recent fluctuations in rankings and traffic. Rumours abound that this was the start of Penguin 4, But Matt Cutts himself has waded into the mess of confusion to clear a few things up. First of all he has categorically stated that there was no Penguin update last week, you can see from the Tweet below/totheleftright?

So what was it? More than likely it was part of Panda refreshing itself now that it is part of the algorithm. So GREAT! There’s still time to Prepare for Penguin. But ‘our Matthew went further than that to definitely rule out that this was a Penguin update by announcing that Penguin 2.0 is still “a few weeks away”.

Penguin 2.0? But we’re currently on Penguin 3. Surely the next update has to be Penguin 4, can Google not count? What Google have done is subtle but they’ve announced that this is going to be a Big Penguin, PenguinZilla in fact. Maybe not that big, but Google have confirmed that this will be the biggest penguin update yet as internally it’s being referred to as Penguin 2.0. The rest of the Penguin updates have subsequently been devalued to: 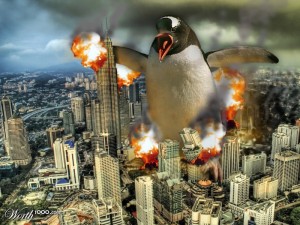 A big step up indeed. However there are still issues with this, especially when it’s left to Google to decide when an update is big enough to progress from 1.2 to 2.0. For example, look at the Panda updates that were released last year that had a few occasional big refreshes but then a long period of small refreshes that eventually led to there being a panda 3.92. This got too much for everyone who then started re-numbering all updates chronologically regardless of size.

We’ll be calling the next update Penguin 2.0, but the crux of the matter here is, Penguin is on it’s way, and it is going to be big. So make sure you’re prepared and start counting your links.