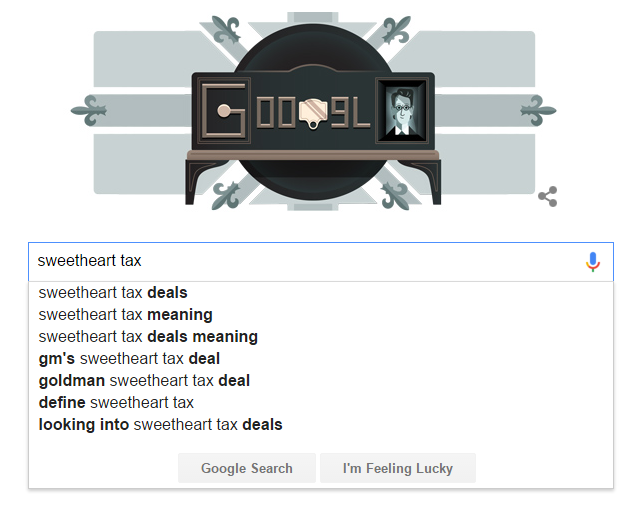 For many small businesses, our customers, and of course Net66 ourselves, there is a rush towards HMRC’s Self Assessment deadline (which is midnight, on the 31 January 2016).  Tax rates are non-negotiable and, whether you are a one-man band or a multinational concern, this means the deadline for online annual tax returns.  Taxation, at best, is the bargain we strike with HMRC for keeping our streets in tip-top condition, and the funding of our public services.  Whether you pay the basic rate of Income Tax or VAT on a meal out, it is inescapable.

Then there are loopholes, and, as we found with some concerns, allegedly (to quote Treasury Minister, David Gauke) “sweetheart deals”.  In the latter category comes our favourite search engine directory, Google.

It was emerged that Google brokered a deal with HMRC to pay £130million of owed tax revenue.  The deal was hailed by Chancellor of the Exchequer, George Osborne who hailed this as a “major success”.  A major success if a year’s worth perhaps, but £130million for ten years back pay equates to £13million per annum.  Which is a trifling amount for the company’s UK operations.

Google’s sums, it is claimed, are based upon advertising revenues in the United Kingdom.  In another source, it was stated that Google would pay three times more tax in France than in Britain.  Google’s rate in France would be €500 million (or £380 million). Compared with their UK operations, Google France’s profits are a third of the UK’s.  Google UK also has four times more employees than its French operations.

Reaction to Google’s deal was met with derision from a wide political spectrum.  In the words of Shadow Chancellor of the Exchequer, John McDonnell (Labour, Hayes and Harlington), it led to “an unholy alliance between myself, The Sun, the Mayor of London [Boris Johnson] and even Number 10.”

David Gauke, Treasury Minister (Conservative, South West Hertfordshire) said, “[it was] insulting to HMRC staff who had worked for years to make sure the tax due under the law was paid.”  Echoing similar sentiments was the Labour MP for Ilford North, Wes Streeting, who said, “constituents filling in their tax returns don’t have the luxury of negotiating their own sweetheart deals.”

Boris Johnson, in his column in the previous edition of The Sunday Telegraph said they were “quite derisory sums [paid] in tax to the UK exchequer.”  The Labour MP for Scunthorpe, Nic Dakin also rounded on George Osborne’s commitment to the UK steel industry asking, “why is this Government so supportive of sweetheart deals for companies like Google, but so slow to act on the steel industry?”

Andrew Tyrie, Chairman of the House of Commons Treasury Committee (Conservative, Chichester), stated that the “UK’s tax law had become too elastic, allowing companies to get away legally with paying too little.”  Google keeps its tax bills low by basing its European HQ in the Republic of Ireland (where Corporation Tax is 12.5%).  Its profits are sent through Holland’s equivalent of the HMRC, and companies in Bermuda, where the British Overseas Territory has a zero rate of Corporation Tax.

Google’s case may have sparked the inquiry, though the proposed inquiry chaired by Mr Tyrie aims to look at how HMRC is clamping down on tax avoidance.  The use of shell companies to avoid taxation is nothing new; TESCO for instance has Jersey based subsidiaries; Amazon’s base in Luxembourg performs a similar function.  There had also been reference to similar sweetheart deals to Google’s with Amazon, Microsoft and Facebook.

The amount of tax avoided by Google rankles with small to medium sized businesses, who also harness the search engine’s power to send business their way.  In one way, entrepreneurs are filing their tax returns to the HMRC towards the deadline.  They are either doing their returns online, or waiting for an answer from their local tax office.  On the other hand, potential tax revenue to the Treasury is being undermined.

The amount that Google owes in the UK and in France – £510 million – is enough to make up the shortfall from funding cuts to two or three Metropolitan Borough Councils in Greater Manchester.  That is before we look at the amounts that have been avoided legally, which is truly eye watering.