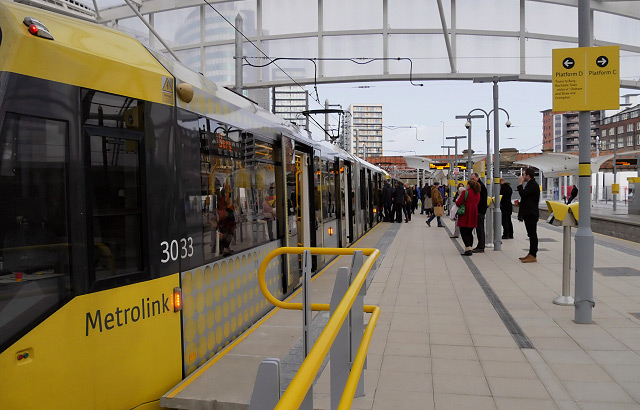 The Second City Crossing (or 2CC for short) is the most important piece of the Metrolink jigsaw as it solves two congestion issues. One of them is its ultimate aim of taking more cars off the road in Greater Manchester. The other issue, any congestion caused by delays on the first city crossing via Market Street. Both city crossings will allow for higher frequencies, handy for boosting existing services and future plans for a Trafford Centre route.

From today, there will be ten trams per hour between St. Peter’s Square and Victoria with an intermediate stop at Exchange Square. Trams from East Didsbury (which terminate at Deansgate-Castlefield) will be extended to Shaw via the 2CC towards Oldham Central. Five journeys per hour will continue north to Rochdale Interchange.

Earlier last week, there was a proving run along the 2CC line. Our friends at Transport for Greater Manchester have posted a driver’s eye view clip on YouTube.

In future years, the intu Trafford Centre could be a tram ride away from Chez Net Sixty Six. By the end of this decade, the new line will continue west of the Pomona stop via Trafford Park. There will be stops near Old Trafford, the Imperial War Museum North and the EventCity exhibition centre.

With Net Sixty Six being close to the recently revamped St. Peter’s Square stop, 2CC will make the tram a most attractive option. Happy New Trams!