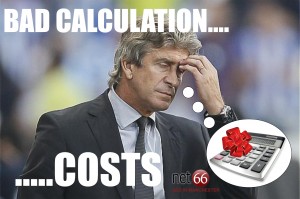 Last week in Munich, there was a Chilean manager of a football team beating the current Champions League Champions. His team were currently in front by one goal and needed another goal to win the group.

Unfortunately for Mr Pellegrini, he had miscalculated what was actually needed. The unfortunate City boss was left with egg on his face after having substituted a striker (who scores goals) for a defender (who doesn’t).

It was made even worse by the fact that after the match, he indicated that had his team scored again, he would have brought on another striker to go after the top of the group. When they only needed one more goal anyway. Oops.

The reason the top of the group is so important is that the next game you play is against the runners up of other groups and therefore, on paper, an easier game.

So that miscalculation by the City manager has set them playing against Barcelona, a very good team, instead of a lesser team such as Olympiakos.

So this is why you should always plot out your goals and make sure you’re on top of them. If Mr Pellegrini was as astute a mathematician as he is a tactician (only at the Etihad of course) then he would have realised he only needed one more goal and could have ended up playing a much easier team.

If you’re a business owner and you haven’t done your calculations correctly this could seriously cost you money and your business.

So make sure you have your business goals set, and definitely make sure your calculations are correct, or you could end up like old Pellegrini.