Google’s Matt Cutts has given us an update on the latest Algorithm Changes. In a tweet responding to an SEO company that had highlighted what appeared to be unnatural linking practices, Matt Cutts stated: 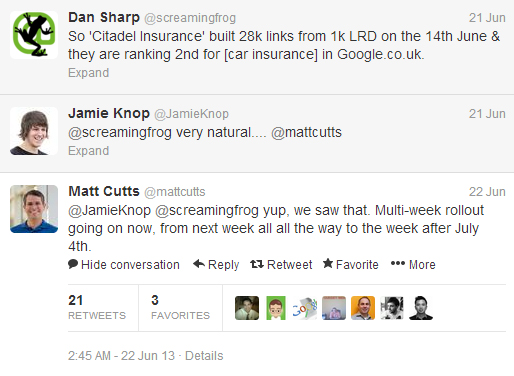 On the face of it that’s a pretty big update. But thinking even deeper, this algorithm has to be pretty big considering they’re having to roll this out over several weeks. This doesn’t really surprise me to be honest. There’s been a lot of talk in the SEO community about strange changes and fluctuations in Rankings and Traffic. One of the strangest claims to be rankings moving up in the SERPs but traffic reducing, which defies logic.

So what do you think these new updates are for? Is this the new Soft Panda algorithm update? Have they released another anti spam update?