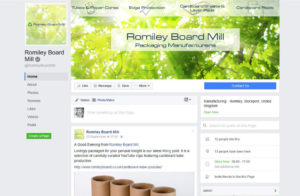 Romiley is only twenty minutes from Manchester Piccadilly station, on the train to New Mills Central. Their premises are a short stroll from the village’s railway station on Oakwood Road. Romiley Board Mill backs onto the Peak Forest Canal with an extensive base.

The oldest part of their nerve centre is Oakwood Mill. It opened as a mill for Ormerod Heyworth in 1837. Oakwood Hall, nearby, was his home. This has recently been converted into housing, though besieged by a fire in November 2016. In 1871, cotton spinning activities expanded with a new brick built mill added.

By 1929, the scene was set for its present use as Oakwood Mill: recycled cotton waste. This led to its present capacity with cardboard packaging following on from cotton waste. Subsequent owners included Sonoco. In August 1994, it was purchased by David Hardman’s and Charles Ingham’s Preston Board and Packaging company.

Today, Romiley Board Mill has come up in leaps and bounds. Another Hardman, Richard Hardman, runs operations at Oakwood Mill. Their main export markets include the Republic of Ireland, Mainland Europe, and the Middle East. Over a hundred people are based in the 22 acre site.

Romiley Board Mill’s internationalist outlook could serve them well into the next two decades. Though with challenging times ahead, there will always be a need for cardboard packaging.