Any reasonable offer accepted for search engine with great potential 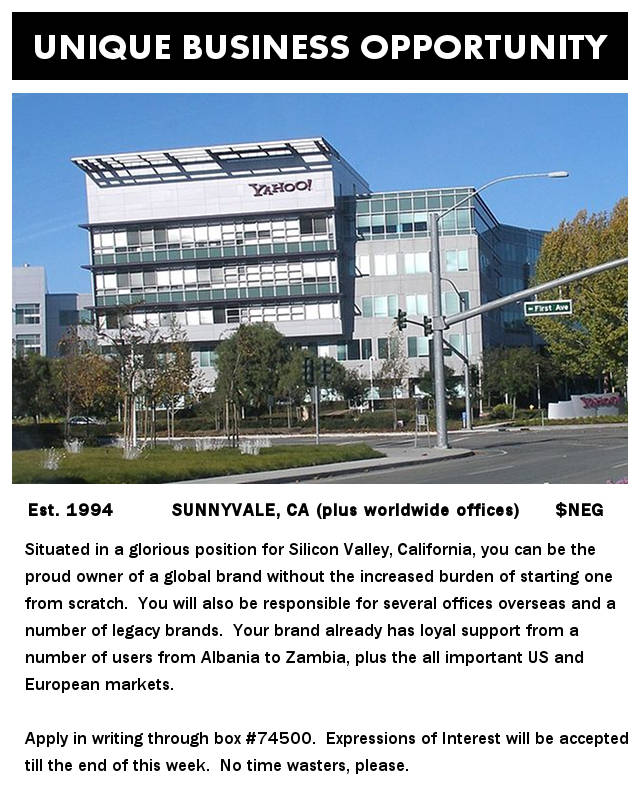 Yahoo!, The World’s Favourite Search Engine before Google came on to the scene, could be taken over by the end of this week. The Sunnyvale, California-based search engine, and media company has struggled alongside the shadow of Google, in spite of strong legacy brands.

Besides its search engine directory, it is known for its email services and portals, including finance and gossip features. The company also owns the image-sharing site, Flickr, and microblogging site, Tumblr. In 2008, it was the subject of a failed $45 billion dollar bid by Microsoft.

The company was formed by Jerry Yang and David Filo in 1994, as Jerry and David’s Guide to the World Wide Web. In 1995, as Yahoo!, it became the world’s most popular search engine. There was also a children’s version known as Yahooligans, with the UK version arriving in September 1996. Yahoo! expanded by means of acquisitions, including Geocities in 1999, and meta search engine Inktomi, in 2002.

Verizon has been tipped as a likely bidder. Yahoo’s portals are a good fit for the company who owns AOL and The Huffington Post. They already have aspirations of being a media player, which fits in with Yahoo’s ambitions. According to CNN, Verizon seems to be the only possible purchaser. In Mashable, the website thinks the media giant is dead as we know it. Journalist Lance Ulanoff, regards it as “that cousin whom you only see at family reunions”.

The Daily Mail and General Trust was hailed as a possible bidder in the Wall Street Journal on the 11 April. With Rothermere’s newspaper Britain’s most popular in dead tree and online forms, its mix of low to middle brow content would be a suitable fit. To finance their bid, DMGT would raise finance from private equity companies. Also touted as a likely bidder for the search engine is YP Holdings, owners of the Yellow Pages’ digital archives.

The future of Yahoo is at a crossroads, but a degree of certainty and stability could be a good thing for a media giant that has been in the shadow of Google for the last eighteen years. We shall know by the end of this week.