This has led to Search Engine Watch and City AM wondering if Google queries are being manipulated to suit the government.  On two search engines, DuckDuckGo and Bing.com, similarly vitriolic suggestions were given to anyone entering ‘Conservatives are’ in the search box. The amount of negative suggestions for Labour and SNP on both search engines were present, though fewer in number.

With the storm over Google’s autocomplete suggestions making the headlines, we at Net66 have looked at our industry. As the SEO world attracts an equal number of plaudits, brickbats and strong opinions (as with British political parties), we conducted our search with Google queries pertaining to ‘SEO’ or ‘search engines’.

Is it, or is it not dead? The first and fourth suggestions question the longevity of search engine optimisation (either subject worth a 1,500 to 2,000 word blog entry). As for ‘SEO issues’, there’s a book out of this somewhere – white or black hat versions. A straightforward ‘SEO is’ query returns at the top of the results a brief description of our industry, as well as the organic results.

(For the third suggestion) Ouch! To say ‘search engines are useless’ disregards the fact many people take them for granted. Whether Bing, DuckDuckGo or Google queries best reflect our desired reference sources, ‘search engines are most useful for finding’ all sorts of things we desire.

Three out of four suggestions mull over the effectiveness of search engine optimisation. As to the question ‘does SEO work?’, it remains a contentious one to this day. Especially given the frequency of algorithm updates and adapting to new developments. A fourth, the cost-effectiveness of SEO which either means investment in high quality content or paid advertising.

Whereas the first three screenshots display suggestions relevant to our Google queries, this is the first one to include a non-SEO related suggestion. The phrase ‘why does Seo Hwa look different’ refers to Seo Hwa, a character played by Lee Yeon-hee in the South Korean TV series, Gu Family Book. In response to the question ‘why does SEO matter?’, well the answer is simple: used effectively, it is an inexpensive way of raising your business’ profile.

The next two questions, ‘why does SEO take so long?’ and ‘why does SEO cost so much?’ refers to common criticisms over the cost and time of SEO campaigns. Organic SEO requires a pragmatic approach, plus investment in great original content and well designed websites.

Thanks, Google… we’d best pack up and get the next flight out of Manchester Airport for Iceland! Well, strictly speaking, our retraction to the first suggestion is that SEO trends have constantly changed. What would be good SEO practice in 2006, or 1996 even, may be obsolescent in 2016. This ascertains our second, third and fourth suggestions.

With the exception of the third suggestion, we see the other three suggestions pertaining to on-page SEO techniques. The first one, ‘seo should logo be h1’, has divided web developers over the last seven years. Our second one, ‘seo should i use meta keywords’ questions whether the Meta Keywords tag has a place in today’s SEO techniques. Today, the Meta Description tag tends to carry more weight in rankings.

Our fourth suggestion, ‘seo how long should a page title be’ is a subjective one. The accepted norm in relation to titles in the <title></title> tags is 50 to 60 characters. Moz.com has an excellent article on the use of <title> tags. 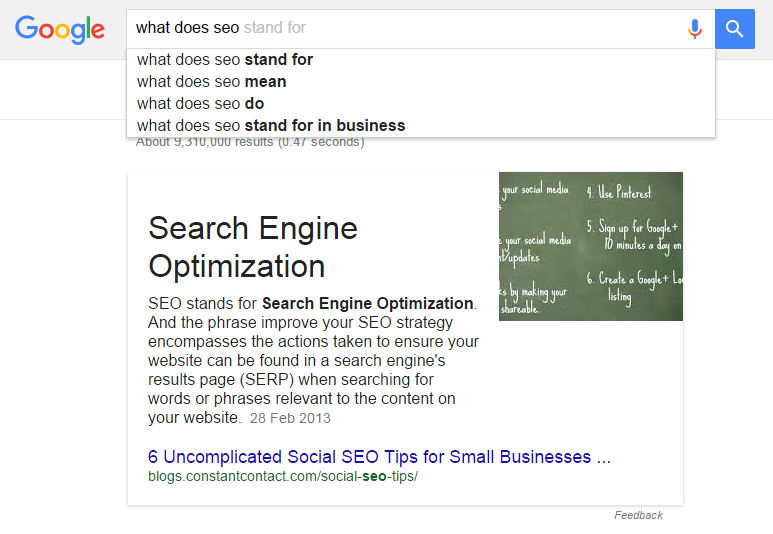 The top suggestion is probably one of the most common SEO related questions. Our screenshot gives us a straight answer as to what SEO stands for: Search Engine Optimisation of course. Among our Google queries, ‘what does seo mean’ and ‘what does seo stand for in business’ sing from the same song sheet.

Our third suggestion, ‘what does seo do’ can also be expressed in the result from the Constant Contact blog.

It’s pretty obvious that the two suggestions have been borne by dissatisfied customers. This is partly because SEO is seen by some as a ‘dark art’, a form of alchemy which is associated with ‘black hat’ techniques. We were hoping it returned something like ‘seo doesn’t make your teeth rot’ or ‘seo doesn’t kill flies’.

Truthfully, the most effective form of SEO is search engine optimisation aimed at humans whilst being mindful of each search engine’s guidelines. In other words, the kind of stuff that we at Net66 excel at; like blogging, high quality written content, well designed websites and social media campaigns. Smashing Magazine’s 11 December 2012 article, The Inconvenient Truth About SEO states one thing which should be gospel to all web developers. That of “better content, not higher rankings” being your primary aim.

With lower labour costs and freelance rates in India compared with European countries and the U.S., India has become a popular place for low cost websites and SEO services. Among our Google queries, the third suggestion also reflects this. As well as being the capital of India, it is also the country’s answer to Silicon Valley.

As for the first suggestion, basic SEO facilities is available in WordPress as standard. These can be enhanced by plugins like Yoast. Our second suggestion, ‘where to put seo in html’, implies that SEO can be added in a certain part of each website. Search engine optimisation should be key to the whole page, whether in the <head> section with the <title> tags, or within content in the <body> section.

Had we answered the question to the first of our four Google queries in 2001, that would be an unequivocal ‘yes’. By the last noughties, their importance had been diminished in favour of the Meta Description tag. Our third suggestion rehashes the first one, though the answer in 2016 remains ‘yes’. Not only Meta Description tags, also the Meta Robots tag which determine whether or not our page(s) should be indexed.

As to the query ‘do search engines search the entire web’, the answer from our Google queries is ‘no’. Intranet results would only be seen on the company’s intranet connected PCs. The entire web also includes what is known as ‘the dark web‘ or ‘deep web’, where extended privacy is used to avoid the flow of sensitive information. It is also a source for illegal activities.

The final suggestion, ‘do search engines influence media piracy‘ refers to a policy document by Carnegie Mellon University. Written by Liron Sivan, Michael D. Smith and Rahul Telang for the university’s Heinz College, it states how many people have access to pirated media.

From our ten Google queries, and the suggestions from its autocomplete feature, entering ‘SEO’ or ‘search engines’ returns a real mixed bag of ideas. The most popular suggestions concern the cost of SEO and its effectiveness.

Many of the autocomplete suggestions may well be popular five years from now. On the other hand, will SEO be dead in 2020? Could Google queries say the ‘Conservatives are finished’ by then? They say a week’s a long time in politics, but five years in the age of the internet is akin to 500 years. Who knows what we shall be searching for 60 months from now? Could they be Bing or Dogpile queries instead of Google queries?